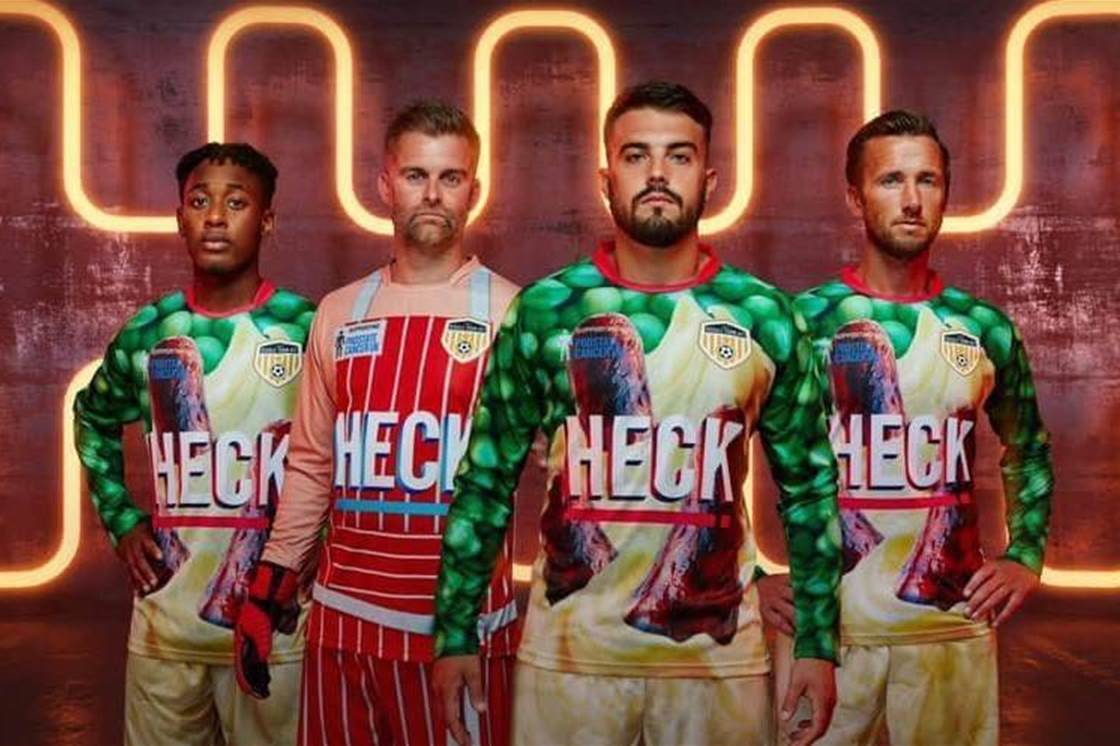 It’s all for a good cause though, with part of the proceeds going towards Prostate Cancer UK

Following the immense popularity of such eyesores as their ‘sausages’  and ‘hot dog’ (pictured below) away kits of recent years, English non-league side Bedale AFC have gone and unveiled their latest abomination, the 2019-20 ‘bangers and mash’ strip.

The amateur club from North Yorkshire have become renowned for their horrendous away kits in association with sponsor Heck Sausages, and some of their recent efforts would even rival the unsightliness of Athletic Bilbao’s infamous ‘tomato sauce’ kit from the 2004 UEFA Cup.

Can ANYONE beat this Kit??? @AfcBedale you’ve done well ..... 🌭 pic.twitter.com/IqYHJYE14M

Bedale’s new away strip features an enlarged graphic comprising sausages and mashed potatoes, which are set in front of a background of green peas extending from the chest to the ends of the sleeves.

The culinary experience continues at the socks, which features a gravy boat pouring the brown liquid down the back of the calves.

The goalkeeper shirt is pretty much just as bad; modelled on an apron and even featuring a wooden spoon ‘tucked in’ to the waist.

It’s all for a good cause though, with 25% of proceeds from shirt sales being donated to Prostate Cancer UK, whose logo also features on the jersey.

Thanks to our hosts @AfcBedale for tonight's game and the warm welcome & competitive game.
Best of luck for the new season! pic.twitter.com/GmTq4sHNlL

Speaking to the UK’s Metro Newspaper, Bedale Chairman Martyn Coombs unsurprisingly took a lighter approach to publicising the jersey, joking, “In the past we’ve been sponsored by Hall’s Fish and Chip’s of Bedale, R and R Ice Cream of Leeming Bar and now HECK Sausages, so you can see our bodies are temples.”

Despite their low profile, the club have turned out a number of relatively well-known products, including Paul and Simon Grayson and Michael and Shane Duff.